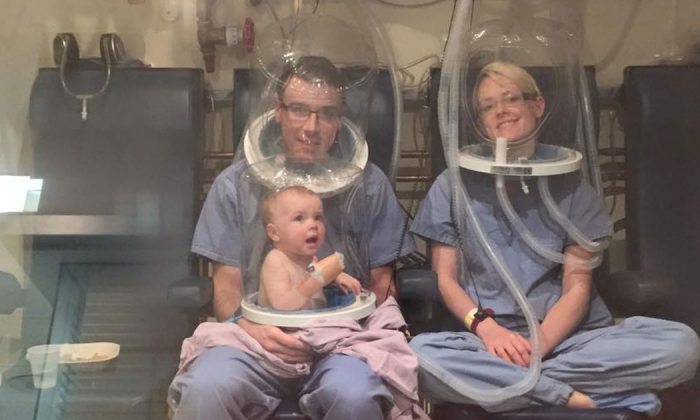 Kyle and Monique Ruppel owe their lives to their infant daughter, Celia, and because of that she’s allowed to wake them up in the middle of the night anytime.

In a post she shared on Facebook, Monique described the scary situation that occurred in the Ruppels’ home and if it wasn’t for her 15-month-old daughter it could have been deadly. Celia unknowingly saved her family from a carbon monoxide leak. Celia usually woke up once each night, but on one particular night she woke up twice.

On one night Celia had woken up and went back to sleep, but she woke up again around 3 a.m. When she woke up a second time Monique got up to calm Celia. “I attempted to make my way to her room but only made it a few feet before being completely overwhelmed with vertigo,” she wrote. Her husband woke up moments later and both realized something was seriously wrong. The couple was suffering from dizziness, headaches, nausea, and their eyes burned.

The couple started to pack an overnight bag and went to get their daughter.

They both went to get Celia and as soon as they reached her the 15-month-old started to vomit.

“At that same moment, one of my cats had collapsed at my feet and she was flat on the floor,” Monique told the Province. “That was when we got pretty hysterical and realized something pretty serious was going on.” The couple had called Kyle’s parents and just as Kyle was about to pass out his parents arrived and they called 911.

The family was airlifted to a hospital where they received treatment for carbon monoxide poisoning.

“I remember thinking in that moment, ‘Is this what it feels like to die?’” Kyle remembered. “Because there was nothing I could do to make my body respond to what my mind was telling me.”

While at the hospital the Ruppels were treated with a hyperbaric chamber, where they sat through three two-and-half-hour treatments. The family’s pets were also treated for carbon monoxide poisoning.

When officials arrived at the Ruppels’ house they weren’t even able to get past the front door without hand-held carbon monoxide detectors going off.

The couple learned that the cause of the extremely high levels of carbon monoxide was a leak in their furnace, and had it not been for Celia—they did not have a carbon monoxide detector in their house—they would have succumbed to the colorless, odorless gas. “

We are so thankful Celia woke us,” Monique wrote on Facebook. “We often wished she would sleep through the night but we do not feel that way any more. Our sweet sweet baby saved us all.”

These folks were fortunate, it could have been worse!! Don’t take the chance, contact WEBCO for further information on Carbon Monoxide Detectors! 763-767-7229